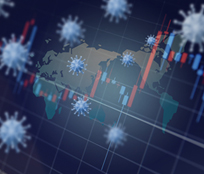 Views From the Task Force—Withstanding the Waves of COVID-19

As markets are currently coping with conflicting headlines of buoyant markets, viral outbreaks and a choppy economic restart, the Western Asset Coronavirus Task Force wanted to share our take on the resurgent growth of COVID-19 in the US as well as the outlook for emerging markets (EM).

Semantics of a “Second Wave”

While market participants have been worried about a second wave of coronavirus spread and infection after initial lockdown measures were relaxed around the globe, the Task Force’s view is that different regions will face a rolling series of outbreaks going forward, rather than one large second wave in the fall. Researchers have generally not established a seasonal element to SARS-Cov-2 infections; instead, we expect continued and/or increased viral spread will come from relaxed social distancing, which will be regional and behavioral in nature.

As our map of the US shows (Exhibit 1), a majority of the alarming recent increase in viral growth rates has come from “first-wave” states with relatively low population infection rates1. Only Louisiana shows up as a “second-wave” state, using our threshold of a >5% infection rate, and a >5% increase in case growth rate since Memorial Day, when social distancing in many states appeared to abate. States hit hard by COVID-19 in March, such as New York and Massachusetts, currently appear to have the virus under control, while early-closing California has seen continued viral growth as lockdown easing outpaced containment of the virus.

While we acknowledge that COVID-19 containment policies in the US have been inconsistent and at times ineffective, the disparities in the growth of the virus based on geography suggest that we are unlikely to see one large wave going forward, but instead smaller overlapping waves of regional outbreaks. The concern regarding the uncontrolled spread of the virus revolves around a region’s ability to handle demands on the health care system, which had originally triggered the severe lockdowns in Italy and New York City. When we think about renewed viral growth, focus on the health care system has shifted to locations such as Houston, where ICU capacity has approached 100% in recent days. While we have not yet seen the full impact of the recent growth in cases, it’s worth noting that COVID-19 mortality rates in the US continue to decline (green line in Exhibit 2)2, which may have to do with the increasing prevalence of cases among a younger and presumably more resilient patient population, and improved therapeutic approaches. This apparent positive trend may be ameliorating concerns about the recent increase in COVID-19 cases (blue line in Exhibit 2).

Where Do Cases Go From Here?

Despite the re-imposition of some containment measures across the country over the past week, several factors suggest that we will continue to see COVID-19 case growth in the near-term. The seven-day moving average positive test rate in the US has increased to 7.5%, well above a 5.0% target suggested by the WHO (Exhibit 3). States such as Arizona and South Carolina have double-digit positive testing rates, which indicates significant pockets of undetected COVID-19 cases in their communities.

A second indicator that suggests we will see additional COVID-19 case growth in the US is Rt, a time-varying indicator of the virus’s reproduction rate estimated by groups such as CMMID and rt.live. Unlike the initial R0 factor that described SARS-Cov-2 transmission in an uncontained environment, Rt estimates the current number of people a COVID-19 patient will infect, using mathematical models of recent case growth. Estimates of Rt are well below the >2.0 rate of February/March, but are still above 1.0 for the US as a whole, indicating that infections may continue to grow at an accelerated pace over the next two to four weeks.

Assessing the Toll on Emerging Markets

As my colleague Kevin Ritter suggested early in the crisis, relative to the developed world, many EM countries may not have the economic resources or government effectiveness to combat COVID-19. We are now seeing severe outcomes in countries such as Brazil and Mexico that have not been willing or able to adequately slow the spread of the virus. Positive testing rates of 34% and 22%, respectively, in these two countries suggest that the official case counts of the virus have much further to grow. While Western Asset’s EM Team does not believe that the COVID-19 crisis will necessarily lead to defaults in large EM countries, the IMF recently reduced its 2020 EM growth forecast by 2 percentage points from April estimates, and dozens of EM countries and companies have been downgraded by credit ratings agencies.

Despite the huge downward impact of COVID-19 on global growth and aforementioned concerns about ongoing viral growth, financial markets as a whole have recovered significantly since March’s volatility. The Task Force continues to evaluate prospects of the many SARS-Cov-2 vaccine candidates being rapidly advanced in the clinic, with critical Phase 3 data anticipated by the end of 2020. One or more successful vaccines would potentially enable a sharp 2021 economic recovery, although we would note the challenges of any given therapeutic treatment making it through the drug development process. Western Asset also attributes some of the equity and credit markets’ resilience to the enormous impact of global central bank support, which has included purchases of government bonds, investment-grade credit, fallen angels and even high-yield ETFs.

We expect support from the Fed and ECB to continue for the duration of the COVID-19 downturn, with additional backstops such as the buying of individual cash bonds should the virus or the economy take a turn for the worse. Ultimately, Western Asset’s ongoing willingness to own risk assets in this challenging time is explained by our optimism for improving health outcomes as well as the ability of central banks to continue to support global markets.

1Cumulative population infection rate estimate calculated as COVID-19 death count multiplied by 2 to account for unidentified deaths caused by the virus, divided by a 1% fatality rate, over total population.