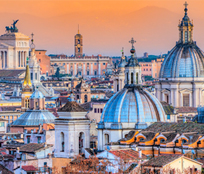 The Outlook for Italy, Part 2—Our Portfolio Strategy

This blog post focuses on our portfolio strategy with respect to Italian sovereign holdings. We begin by providing some background information then assess the current market opportunities. Part 1 discussed Italy’s outlook from a macro perspective.

Given our investment perspective, we have been and continue to be overweight Italian bonds. We fundamentally believe that European and Italian policymakers in particular will “do the right thing” sooner or later. That said, we typically invest in Italian bonds as a “spread market”, i.e., a risky asset relative to the “safer” eurozone benchmark, German bunds. To simplify, the chart below shows this relationship between bonds of the same 10-year maturity.

At the beginning of 2019, we held a small active overweight and during the year we increased this overweight in two steps. First, we increased it to what we would consider a medium-risk level after spreads widened in the spring as a result of political noise around Italy threatening to issue IOUs and the associated re-denomination risk as they could be considered a parallel currency1. In a second step, we increased the overweight further prior to Lega leader Matteo Salvini pulling the plug on the ruling coalition with the 5-Star Movement (M5S). Contrary to Salvini’s expectations, the turmoil resulted in a new coalition between M5S and the center-left Partito Democratico (PD), still led by current Prime Minister Giuseppe Conte. This less confrontational government allowed spreads to narrow to around 130 bps and we reduced our position back to medium-risk at the end of the year.

In February this year, we again increased our exposures on the back of COVID-19 related spread widening. In retrospect, this was too early as we underestimated the political reaction both in terms of the lockdown and related growth impact but also in terms of fiscal deterioration. As noted in Part 1 of this blog, Italy was amongst the first of the European countries to see a widespread outbreak. What started as a regional outbreak in and around Milan (in the industrial heartlands) spread across the country and induced the lockdown. This lockdown has now been in place for around 10 weeks and is only just beginning to be partly lifted this month. The spread-widening was exacerbated in March by extraordinary global risk-off moves across all asset classes. Moreover, ECB President Christine Lagarde’s unfortunate comments at the March Governing Council meeting that the institution’s role was not “to close spreads” led to a further widening of 75 bps post the meeting. Communication efforts to re-frame her comments failed and it wasn’t until the Pandemic Emergency Purchase Program (PEPP) was activated later in March that spreads narrowed.

And this is the crux of trading Italy today. On one hand, we have a large economic shock that will materially weaken growth in 2020 and a very necessary—and for now appropriate—fiscal spending package (circa 4.5 % of GDP) which entails substantially larger debt issuance. Weaker growth and more borrowing obviously imply a higher deficit and debt-to-GDP ratio, which has already led to a rating downgrade by Fitch as detailed in Part 1. On the other hand, we have the ECB’s current purchase programs already amounting to over €1 trillion for the eurozone as a whole, with potential to be scaled up and extended. Thus the battle lines are drawn between rising fiscal vulnerabilities versus the ECB backstop. This “issuance versus central bank purchases” clash is ongoing in most debt markets—but in Italy the scale is that much greater.

Our view is that the central banks will ultimately win this battle over the course of this year and possibly next, and that market sentiment toward Italian debt will improve for a number of reasons. First, borrowing at the front end of the yield curve will continue to be less costly than further out the curve and a steeper curve, together with higher borrowing needs, has induced the Italian sovereign to revive front-end issuance, similar to what happened in 2008/2009. Second, under the existing framework the ECB can purchase a greater amount of bonds (€130 to €135 billion) than Italy is currently planning to issue this year even with strict adherence to the capital key. This assumes that total net issuance (around €170 to €175 billion) is rebalanced somewhat toward the front end as mentioned before (30% at the front end would reduce bond issuance by around €50 billion) and/or that Italy accesses the ESM financing facility (up to around €35 billion). Third, accessing the generous terms of the ESM facility would reduce the need for market issuance by up to 2% of GDP and bring debt service costs further down considerably (relative to borrowing in the market at comparable maturities). Other factors that will help improve market sentiment more broadly relate to the economy: recent moves to reduce the severity of the lockdown will speed up the growth rebound as will a well-designed European recovery fund with a significant grant element without creating additional debt. In that context, our view is that the German Constitutional Court’s recent ruling may have important constitutional implications further down the road but that its impact is rather limited in the near term: an argument needs to be made, most likely by the German government, that the ECB had fully considered the purchase program’s side effects. As all these building blocks of our view continue to fall into place, we expect to see the beginnings of a reduction in the twin fears of growth and debt.

Against this (on balance) positive backdrop, we hold a mixture of nominal and index-linked bonds. The nominal securities we hold are longer-dated as the Italian curve has a history of flattening aggressively under periods of market stress, and we view this as a more defensive position. In addition, we also hold index-linked bonds which are higher beta compared to nominal bonds (i.e., they perform worse in a sell-off and better in a rally). As we have done in the past, we also partly hedge our exposure to Italy via euro puts to gain some protection should the situation worsen in the near term.

1A political project of the Lega, mini-BOTs (Boni Ordinari del Tesoro) were intended as small-denomination IOUs issued by the government to its suppliers and could be used—in addition to the legal tender, the euro—as means to conduct transactions and pay for tax liabilities with the presumed advantage of not counting as debt in a Maastricht sense. Critics, such as then-ECB President Mario Draghi pointed out that “they are either money and then they are illegal, or they are debt and then that stock goes up”.