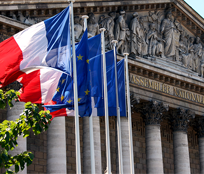 French Elections in 2022—What Are the Implications for Financial Markets?

In the wake of recent elections in Germany, another core country in the eurozone is getting ready for the polls. French elections are scheduled for April 2022, but we already have sufficient clarity on who the candidates will be. In this note, we highlight that while this vote should have a smaller impact on financial markets than the country’s previous elections in 2017, we believe a degree of caution is warranted given the persistent uncertainty surrounding such events.

The European Project Is Largely Unthreatened

Five years ago, only a few months before Emmanuel Macron’s 2017 Presidential Election victory, markets were intensely focused on the prospect of a cataclysmic outcome, which could have potentially destabilized the whole European project: the election of Marine Le Pen. Fast forward to today and the picture looks very different. First, we believe that Le Pen’s chances of success remain very slim. Among other reasons, the rise of a direct competitor in the form of far-right nationalist Eric Zemmour has been a blow to Le Pen’s support and should take away crucial votes from her party. Second, during the last campaign, a key element of Le Pen’s program was for France to leave the European Union and eventually the eurozone. She has since pivoted back to a more pro-eurozone stance, taking both pledges out of her manifesto. Additionally, none of the other candidates (including Zemmour) have declared any intentions of “Frexiting.” In essence, the European project in 2022 will largely be unthreatened. In our view, this is one of the reasons why French investment assets have not experienced the same level of volatility as they did during the lead-up to the 2017 election. 10-year French government bond yields are trading close to a historically tight level over their German counterparts (Exhibit 1).

Until recently, our view was that President Macron would be unchallenged in a hypothetical second round against any of his potential opponents. His candidacy and subsequent victory in 2017, based on a “neither left, nor right” model, had weakened historical mainstream parties. Looking at the first-round opinion polls (Exhibit 2), the historically strong Socialist party, represented by Anne Hidalgo (current mayor of Paris), is polling around 3%. Far-left Jean-Luc Mélanchon, who obtained a score of about 20% in 2017, is now absorbing around 10% of voting intentions. Just like the left, the right wing has been divided with no fewer than three candidates currently fighting for a spot in the run-off. However, earlier this month, center-right Republicans managed to get together and rally behind Valérie Pécresse, former minister under President Sarkozy, the unexpected winner of the party congress. She has the benefit of being seen as pro-business as well as firm on immigration and security—attributes that can re-attract the moderate right-wing electors seduced by Macron in 2017. At the same time, she is less polarizing than the likes of Le Pen or Zemmour, hence prospectively more capable of attracting voters from the center-left who are disappointed by the current President. According to latest polls, not only did she jump from around 10% to 20% of voting intention in the first round after her party nomination, but also, she appears to be the only candidate in a position to win the election in the event of a second round against the incumbent President (Exhibit 3). This momentum, should it be maintained, has scope to lead to political alternance, particularly if President Macron’s popularity gets dented further by successive waves of COVID-19.


A Scenario with Two Extremes in the Second Round Is Unlikely

The threat of seeing two extreme candidates fighting it out in the second round has not disappeared but looks unlikely. In 2017, our view was that a highly negative scenario for French (and indeed European) assets was a potential second round opposing far-left Jean-Luc Mélanchon against far-right Marine Le Pen, both of whom had a plan to reshape the current standing order of the European Union. Such a scenario could have sent shock waves across financial markets. We feel that this risk has diminished significantly for 2022. As discussed earlier, Mélanchon has been stable and low in the polls while Zemmour and Le Pen cannibalize each other’s voters too much to both make it past the first-round line. Crucially, although their governing style could certainly be unpredictable, none of their policies would lead to the imminent disintegration of the European Union.

The Campaign Is Still Long

A lot can still happen as we saw in 2017. Up until late January, before revelations of a series of political scandals broke, Republican candidate François Fillon was leading the polls and broadly considered as the most likely winner. We are more comfortable now than we were back then that the outcome of this 2022 election should be benign for asset prices given that we have a clearer picture regarding the candidates and their proposed programs. However, if past is prologue, things can still change quickly and uncertainty surrounding a tight race tends to translate into investment volatility, justifying a degree of caution in our opinion. As a result, and given the current valuations, we will remain underweight to French government bonds—at least until more clarity unfolds around what promises to be a dynamic campaign.