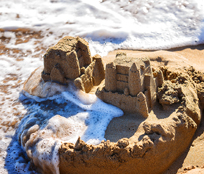 When it rains it pours, as the saying goes. This week’s quarterly release of macroeconomic forecasts by the IMF presents an unequivocally bleak near-term outlook for EM economies. For the full year 2020, GDP is poised to shrink in all but a handful of countries, reflecting the double-whammy of the coronavirus/COVID-19 outbreak and the oil price rout. Yet, rather paradoxically, EM value opportunities often arise as a result of macro challenges, as past episodes of economic crises would attest. In this post, we highlight three observations regarding EM growth prospects, and outline a few strategic themes regarding EM as an asset class.

First, the growth downgrades are spectacularly abrupt. For EM as a whole, GDP is now expected to post a 1.0% decline in 2020—which is definitively uncharted territory (Exhibit 1). This stands in stark contrast with IMF estimates released in late-January. On the heels of the conclusion of the US-China “Phase One” trade deal, EM growth at the time was expected to accelerate to +4.4% in 2020. As a matter of fact, the IMF had even raised its 2020 GDP forecast for China to 6.0% in January (from 5.8% in October). This was despite the first appearance of the coronavirus outbreak in parts of the country—notably Wuhan—in the closing months of 2019. The widely held view then was that a global pandemic was a low-probability scenario.

Second, macro healing will likely be gradual. The anticipated rebound of +6.6% next year, while welcome, belies the persistence of economic undershoots in recent years. Structurally, the growth trajectory of all but a handful of countries has downshifted meaningfully heading into this recession (Exhibit 2). As a rule of thumb, EM growth is now roughly half of the average pace achieved a decade ago. Based on the latest IMF forecasts, the level of EM GDP by year-end 2021 remains at least 3% below that inferred from the January IMF estimates. We also see the risk of a drag from the inability to contain the coronavirus outbreak for some countries, given weak public health infrastructure.

Third, the growth trajectories differ across countries. Growth dispersion appears to be rising within EM countries. Those with large populations (China, India, Indonesia and the Philippines) will possibly avert a full-year GDP contraction in 2020, given the dominance of domestic demand. On the other hand, commodity-reliant economies (the Middle East and Latin America) will face considerable headwinds. Assuming the viral outbreak is contained, we foresee a pair of downside risks that could re-emerge: (a) renewed trade tensions, which will weigh on small open economies and (b) a resumption of social unrest that affected many capital cities around the globe in 2019.