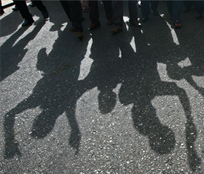 “Civil disobedience turned violent. Government leaders forced to flee.” These were the words we used to describe the tumult taking place in Chile and Hong Kong in a 2019 blog post titled, Don’t Underestimate the Cost of Social Risk. Shockingly, this description now applies to the United States following the stunning mob assault on the US Capitol on January 6, 2021.

As we underscored in that note: “… it would be a mistake to view social risk solely as an emerging markets issue. One only needs to look at the Brexit saga in the UK, the flare-ups in Europe … and the impeachment proceedings currently underway in the US as proof of how social discontent can upend countries no matter how economically sound or politically stable they may appear to be.”

The US insurrection joins the global pandemic and global trade war as the third paradigm-busting development in the last three years. Indeed, each one of these events shattered the order we’ve grown accustomed to, or put differently, they upended our expectations of what’s possible in this day and age. Scholars and commentators will undoubtedly spend a significant amount of time trying to ascertain the specific forces that gave birth to these events and their longer-term ramifications on economies, political order and society. For now, and in the wake of a Democratic sweep of the US presidency and both houses of Congress just a few days ago, the US political picture through the eyes of the world has become muddied with respect to the Trump administration and what lies ahead in the first days of the Biden administration.

US fixed-income markets will undoubtedly focus on anything that might alter near-term prospects for domestic growth and inflation (specifically, the details around fiscal action). From our vantage point, we expect a flurry of politically charged, sensationalist headlines in the coming days as impeachment proceedings progress, law enforcement investigations around the insurrection unearth new details and as we move closer to President-elect Joe Biden’s inauguration on January 20. But as was the case during the early days of the trade war and the Covid pandemic, we expect markets to ultimately maintain their forward-looking stance, supported in large part by market certainty around the Biden administration taking the helm in a few days and the knowledge that the Federal Reserve will maintain its strong commitment to supporting economic and market stability.

This latest development also serves as yet another opportunity for us to push back on the tired narrative that fixed-income has lost its appeal as an investment or utility as a risk management tool simply because “yields are too low.” If we review the historical record, especially over the past three years, active US duration and yield curve management can offer material diversification benefits and ballast in broad investment portfolios during periods of pronounced market volatility. With US political risk spiking against the backdrop of a COVID-19 resurgence, we don’t believe this is the time to be greedy, undisciplined or complacent.