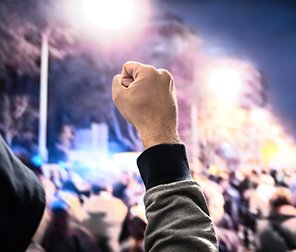 Civil disobedience turned violent. Government leaders forced to flee. Investors caught off-guard by a wave of social unrest sweeping across a number of countries. Such moments bring to mind the Arab Spring—a transformational time beginning in Tunisia in 2010 and that had long-lasting ramifications on growth, politics and society across much of the Islamic world, including protest, violent power struggles, Sectarianism, collapse of state systems, a second Arab Spring and ongoing conflict.

This season, we’re witnessing similar tumult in both Hong Kong and Chile, which is producing shockwaves locally, regionally and globally for those who over recent decades had come to view each of these areas as an oasis from social instability. Now, however, Hong Kong and Chile join a list of the “crisis-stricken” that includes Bolivia, Ecuador, Argentina and Venezuela, as well as Syria, Iran and Iraq to name just a few other hot spots. The common thread running through these stories of social discontent is the population’s growing outrage over issues such as government corruption, income inequality and diminishing freedom. Perhaps even more worrying are signs of power vacuums in these countries and the increasing role of armed forces to maintain law and order.

What lies ahead for these countries is unknown, but the Arab Spring experience underscores two key risks: first, the possibility of contagion to other countries (irrespective of geographical proximity), amplified in large part by social media, and second, a sharp reversal of economic growth expectations and far-reaching costs for those affected.

For instance, in response to the speed at which uprisings brought down governments across Egypt, Libya, Tunisia and Yemen, the more financially stable countries in the region such as Saudi Arabia, Kuwait and Oman took unprecedented steps to ward off “copycat” uprisings by boosting government spending on social programs. Ultimately, the unanticipated shock to fiscal balances combined with sizable portfolio outflows engendered an economic contraction across the Middle East and North Africa, the effects of which are still felt today.

While it is too early to know how these situations will play out, it would be a mistake to view social risk solely as an emerging markets issue. One only needs to look at the Brexit saga in the UK, the flare-ups in Europe (e.g., the “yellow vest” movement in France and the Catalan independence movement in Spain), and the impeachment proceedings currently underway in the US as proof of how social discontent can upend countries no matter how economically sound or politically stable they may appear to be.

Nor should we underestimate the role that social risk can have in thwarting growth expectations and roiling financial markets. For example, Hong Kong officials have already sounded the alarm on the city’s growth forecasts as five months of protests have had a debilitating effect on consumer spending (primarily by way of hits to retail and tourism), as well as waning investor confidence. In Chile, the surprise bout of protests precipitated a sharp depreciation of the currency with continued uncertainty weighing on asset prices.

If the list of risks in 2019 were much more multi-faceted than the prior year, then the list for 2020 offers no substantive relief for investors. If anything, it is shaping up to introduce even further uncertainty, with social risk across different regions at or near the very top of list.