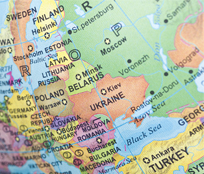 Here we outline our latest thoughts on the market implications of Russia’s invasion in Ukraine. We describe our views regarding the two countries’ economies, and also the broader effects the situation will likely have for both emerging markets (EM) and developed markets (DM). We also touch on the “epochal” shift in German external defense and energy policies, which will have implications for European policies.

Stated plainly, Russia’s invasion of Ukraine will hit both economies hard. For Ukraine, a strong relationship with global capital markets as well as international support for the Ukrainian government from the IMF, EU and others will provide critical support. Russia, by contrast, has hitherto been viewed as a strong EM economy earning the moniker “fortress Russia.” In recent days, we have seen a very rapid escalation of sanctions on the Russian sovereign as well as other Russian entities, forcefully chipping away at that fortress-like economic insulation. Taken together, these sanctions have been unprecedented in that this is probably the first time a sizeable economy has been targeted with such significant and comprehensive interventions. The impact has been immediate and will continue to play out over the coming weeks, months and indeed years. We also believe that, given the current trajectory, the Russian economy is headed into a severe and potentially lasting recession against a backdrop of elevated inflation. Russia will also suffer due to economic isolation from large parts of the global economy.

On a more strategic level, we see the imposition of sanctions against Russia at this intensity as having at least two major implications. First, we expect to see a proliferation of fallback systems in global finance (i.e., alternatives to the secure SWIFT communication system among financial institutions). This will render the sector substantially less efficient and raise the cost of doing business. Second, the real economy implications of reducing economic exposure to Russia for a large part of the Western world will likely result in a substantial re-orientation of global trade flows and an element of de-globalization. While energy imports from Russia have been carved out of current restrictions for now, it is unclear whether this situation can last—either because Russia might curtail exports in retaliation or because the provision of foreign exchange to compensate for those exports might become less palatable politically.

In this context, it is worth examining the German response to events. Germany is among the largest importers of commodities from Russia and has previously been rather slow to agree to sanctions—for many reasons, including fear of retribution. However, in a major policy reversal, German Chancellor Scholz announced a sweeping change to Germany’s long-standing stance on a number of topics, including committing to a very significant near-term increase in defense spending, the provisioning of military equipment to Ukraine and the strategic target to reduce Germany’s dependence on Russian commodities. To achieve this, Germany will turn away from existing and planned pipelines with Russia and build out its LNG capabilities through import terminals, accumulate higher coal and gas reserves and accelerate its renewables rollout. In other words, Nordstream 2, together with much of the post-war German stance toward Russia, has been written off politically. Germany will have to look for different sources of energy, both domestically and internationally. On the flip side, Russia will also have to seek out different customers for its natural resources, which, at around 13% of GDP, form the bedrock of its economy.

Energy and soft commodity prices are likely to remain high, both in spot markets but also for forward contracts covering the next winter given the questions around German and European energy security. To us, this has two major implications. First, global growth will slow on the back of elevated energy prices, uncertainty, and, for Europe, new supply-chain issues. We currently see European growth in 2022 at around 3%, down from a 4% projection at the beginning of the year. To prevent a further erosion of real purchasing power, which has already been hit hard by decade-high inflation, we expect governments to cap retail energy prices thereby shifting the burden of adjustment yet again from private to public balance sheets. At the European level, this could be combined with a strong push for investment in energy independence where needed. The Next Generation EU recovery fund strikes us as an obvious blueprint in this context: borrowing against the future to enable EU-wide policy changes in the present. If energy prices remain elevated, the growth outlook would worsen further, even if the fiscal tab is picked up by governments.

Second, inflation trajectories are rising and will likely remain elevated throughout most of the year. While we expect the upside to be capped by fiscal intervention as mentioned, we now see annualized European inflation peaking close to 7% in spring and remaining above 5% for most of 2022. This puts the ECB in a tricky position as slowing activity levels should also have a moderating impact on core inflation in the near term. That said, a significant increase in wage growth is becoming ever more likely, leading to higher core inflation over the medium-to-longer run. At this stage, we don’t believe in a “pivot away from the pivot” in the sense that the broad direction is still one of slowly reducing the very accommodative stance. However, the significant rise in uncertainty should push back the timeline somewhat.

While there is no longer any need for a purchase program related to the Covid pandemic, an abrupt end to Russian energy deliveries could open up very large downside risks to growth and upside risks to headline inflation. This situation would require renewed fiscal-monetary coordination that looks very similar to what we have seen over the last couple of years.

A similar argument also holds for most other central banks in Europe although some of the smaller EM central banks have already taken a number of steps in their respective hiking cycles. For them, the larger concern at this point is weakening exchange rates that would feed quickly into inflation and we expect them to intervene to support their respective currencies if deemed necessary. At a global level, the concerns around geopolitical and market uncertainty, and emerging downside risks to growth also will factor into other central banks’ decision-making, albeit at a reduced intensity outside Europe.

Finally, we expect Russia to suffer further significant downgrades in traditional rating frameworks but also in terms of its standing from an ESG perspective. While not all quantitative ESG frameworks are built to capture the current developments appropriately in real time, Western Asset is continually working on ways to strengthen the qualitative pillar of our analysis.

International sanctions in response to the Russian hostilities, but also Russian countersanctions have essentially caused a trading halt in local Russian assets, at least for now. While around 20% of outstanding Russian debt denominated in local currency is held by non-residents, transactions in those securities are hampered by uncertainty around settling, dynamic sanctions headlines and the lack of a functioning marketplace. Ukrainian fixed-income securities are currently trading at distressed levels, but are not fundamentally impaired. Going forward, conditions in those markets will obviously depend on when—and in what context—hostilities subside. However, we believe that the hurdle is very high for sanctions on Russian debt to be rolled back anytime soon. That said, as an active manager with a long-term fundamental value investing philosophy, we take into consideration not only the most recent developments but also how the latest news fits in with the larger global context.

More broadly, markets have started to lower rate hike expectations in the US and the eurozone, whereas safe-haven duration assets have been subject to significant oscillations, driven by headlines. Bigger picture, DM economies have been, so far, relatively resilient to current developments, but there is obviously a risk that spillovers will increase in the near term. We expect a continuation of our broad investment theme once the hostilities have subsided: a flatter US yield curve, higher yields in the eurozone, moderate euro strength and catch-up potential for EM assets, in particular those benefitting from high commodity prices.