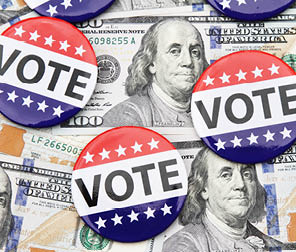 The global financial crisis a decade ago jolted markets, advisers and investors alike. But once the dust settled, we saw changes to the housing markets, financial markets and the rules governing industry participants. The regulatory response included highlights such as the Dodd-Frank Wall Street Reform, the Consumer Protection Act, the Financial Stability Oversight Council and the Consumer Financial Protection Bureau, along with new rules about floating net asset values and systemically important financial institution designations.

At Western Asset, we regularly exchange best practices and industry observations with our clients and colleagues that collectively can help address operational and regulatory challenges in the investment industry. This post highlights a handful of common misconceptions and practice challenges for investment advisers and political contributions they and their staffs make.

SEC Rule 206(4)-5 resides among the roster of regulatory revisions, and became effective in September 2010. Better known as the “pay-to-play” rule, the SEC targeted political contributions made by investment advisers or certain employees in the name of the public trust. The objective was to address the classic political conflict of private parties making contributions to politicians to obtain or be considered for government contracts. The SEC expressed concern that public officials could compromise their own fiduciary obligations to pension plans for which they have responsibility due to the distortive effect “pay-to-play” practices can have on investment advisers seeking to win or retain business.

While the SEC has no jurisdiction over political officials or the merits of their conduct, the SEC does have authority over investment advisers—parties in a position to make contributions. The philosophy is similar to the Foreign Corrupt Practices Act. The SEC can’t control government officials but it can regulate the investment advisers who might be tempted to make contributions to gain influence.

In adopting the Rule, the SEC waded into unfamiliar waters for investment advisers and sent ripples through adviser workforces. Adviser employees were not used to having their employers limit personal political contributions. Compliance officers found themselves discussing the SEC’s perspectives on First Amendment law. While the SEC approach was based on an existing framework governing broker-dealers engaged in the business of municipal securities issuance, that’s a very different part of the financial services industry.

When the US political process completes its journey toward Election Day 2020, a decade will have passed since the SEC rule was adopted. Even though almost 10 years have passed, misconceptions and practice challenges persist. Here are five myths worth a closer look:

Myth #1: Advisers Are Prohibited From Doing Business With Any Politician/Public Entity to Which They’ve Made a Political Contribution

Practice Tip: Predicting the future is difficult. An adviser considering a potential political contribution doesn’t have to forego the future ability to work with a government entity for the next two years. If handled properly, the downside risk is short-term revenue loss rather than an SEC enforcement action. The distinction may be a nuance that only a lawyer could love, but at least the adviser has the option rather than the requirement to bear a temporary loss of revenue. Of course, diplomacy may also be required with a government prospect or client to work through the situation which has its own cost.

Myth #2: The Rule Only Applies If an Adviser Is Seeking to Influence Investment Decisions

Truth: The SEC Rule focuses only on the act of the contribution, but not the motivation for the contribution. The Rule does not require that an adviser or employee does anything improper or seeks an unfair advantage. It does not require that the government entity be conducting an active search or considering an investment decision. It does not even require the individual employee making the contribution to actually interact with the prospect or client. The legal term is strict liability. The SEC has brought several enforcement actions against advisers with no sign of bad intent from employees involved, including for contributions made by a single employee for as little as $500 that were returned by the campaign.

Practice Tip: The Rule permits narrow exemption for contributions that are identified and returned from the campaign quickly. Failing that option, the Rule also provides an avenue of appeal to the SEC for an exemption. Potential applicants need to weigh their facts and the amount of fees at risk against the labor, time and resources involved. SEC orders granting appeals are public information and provide a roadmap for future applicants.

Myth #3: The SEC Rule Applies to All Political Contributions by Employees.

Truth: Only “covered associates” are subject to the Rule, which encompasses senior management and employees involved in soliciting government entities. The Rule does not cover other roles such as operations, finance or human resources.

Practice Tip: Advisers often apply their own policies of pre-clearance and reporting to all staff, but may also keep a narrower staff list of covered associates for purposes of the Rule. The precise scope of covered associate is academic until the point of a triggering contribution—when it becomes extremely important. However, applying a policy across all staff helps mitigate the logistical challenges of applying rules to only one group of employees. It also mitigates the risk in cases where applying the definition of covered associate may be difficult due to blurry job responsibilities.

Truth: The Rule does not “cap” employee contributions. Rather, it stipulates that an adviser may not earn fees if “Covered Associate” contributions exceed de minimis thresholds (contribution limits of $350 if the employee can vote for the candidate; or $150 otherwise). The effect may be the same for advisers who do business with government clients, but the thresholds are not absolute. Advisers that do no business with any government entities may elect to choose a different course for their staff.

Another important nuance is that the de minimis thresholds are measured with aggregate contributions for each election cycle for each Covered Associate employee—but a primary and general election are each considered separate elections. The Rule does not look to each contribution individually (otherwise, it would be easy to circumvent with numerous small contributions).

Practice Tip: The aggregate threshold is a good reason for pre-clearance. Election cycles can stretch out over many months, so memories can fade. A diligent compliance officer can prevent a violation by checking the log of prior contributions before approving a request to approve a new one.

Myth #5: Contributions to Campaigns for US Federal Office Are Exempt From the Rule.

Truth: The Rule focuses on contributions to state and local government officials who are responsible for or can influence the decisions made by a public entity. Sitting state or local government officials are often candidates for federal offices and the Rule covers contributions to their campaigns because of their current role. For example, this distinction arises when a US presidential candidate selects a running mate who is a sitting state governor.

Practice Tip: In the absence of State or Local Government official involvement, advisers can approve political contributions above the de minimis thresholds without consequence under the Rule. US Federal offices such as the president, vice president or US Congress are out of scope in that case.

Employees may not know why a contribution for one candidate is approved and another is rejected when both are running for the same office (or worse—they may think the adviser is taking a political position in support of or against a particular candidate). Diplomacy may be prudent to explain the source of the difference.

Please check back next week for Myths #6-10.