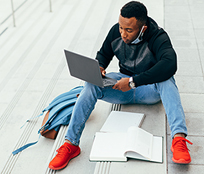 Two key student loan proposals are front and center in the new Biden administration and have gained momentum in light of the COVID-19 pandemic. They involve student loan forgiveness and expansion of the payment forbearance program. While these proposals may increase uncertainty for investors, we believe they can be accretive to student loan ABS.

Student loan forgiveness has been a politically divisive topic in recent years, especially as the number of student loan borrowers in economic hardship programs continues to surge. About one-third of all federal student loans are currently in various reduced monthly payment programs, with remaining principal balances set to be forgiven in 25 years. The usage increase of such hardship programs over the past decade has extended expected average lives for student loans and the ABS bonds that are backed by them. The pandemic disruption brought the topic of student loan forgiveness to the forefront and closer to reality. While timing or execution (by legislative or executive order) is still unclear, the likelihood of meaningfully permanent relief for federal student loan borrowers is high.

Of the $1.56 trillion in federal student loans outstanding, 16.2% are issued under the Federal Family Education Loan Program (FFELP) and roughly half of that (8.5% of total) are securitized in the ABS market. Loans issued under FFELP were originated by private lenders and subsidized, with 97%-98% guaranteed by the federal government. The remaining loans, currently totaling $1.3 trillion, are originated and fully guaranteed by the federal government under the Federal Direct Loan Program and are held by the Department of Education together with the remaining FFELP loans.

President Biden’s campaign agenda called for student debt forgiveness of $10,000 for each borrower as well as any student debt that covered tuition at public colleges for lower earners. Some members of Congress have shown support for $50,000 forgiveness per borrower. While it is too early to tell, we expect proposals to end up closer to the lower end of those figures as evidenced from recent discussions between the Biden administration and Congress. The scope would likely be limited to federal loans under the Direct Loan Program as the government ultimately bears the credit risk for these loans. We do not expect private student loans to be included. It’s important to note that forgiveness would be most effective if targeted first toward loans in hardship programs, which promise forgiveness after a set number of years. FFELP student loan borrowers would be able to participate in the forgiveness program by consolidating their debt into the Federal Direct Loan Program.

To put it in context, $10,000 forgiveness for all federal borrowers would allow 24% of the total balance in the Federal Direct Loan Program to be forgiven ($320 billion in total, affecting 32% of borrowers). While $50,000 forgiveness for all borrowers means two-thirds of the current Federal Direct Loan Program would be retired ($890 billion, affecting 75% of borrowers). The result would amount to significant sums of money under either scenario.

Student loan debt forgiveness would be credit positive for the student loan ABS market. It would enable FFELP borrowers in hardship programs to prepay their loans, thereby lowering usage of forbearance and hardship plans in FFELP ABS trusts. This would increase total loans in repayment and shorten expected average lives for FFELP ABS bonds. In addition, borrowers with in-school private student loans would benefit as borrowers would have incremental free cash flow after their federal loans are reduced.

In late January 2021, President Biden signed an executive order extending forbearance relief (a pause in principal and interest) to September 2021 provided by the CARES Act for federal student loans. The day after, the COVID-19 Student Loan Relief Extension Act was introduced, proposing the forbearance relief program to include FFELP and Perkins loan borrowers, which were previously excluded from relief. We believe this bill is unlikely to pass for several reasons. Forbearance relief would be extended for a relatively short time, just six months from now while the bill isn’t up for a vote yet. Borrowers are generally in better economic condition than when the pandemic began and less in need of relief at this stage. Finally, the logistics to reimburse lenders would be far more complex than pausing payments under the Federal Direct Program, necessitating a longer timeframe to pin down details required to pass the bill.

We believe extending help to FFELP borrowers would be easier to accomplish via a consolidation program into the Federal Direct Program to utilize the existing forbearance relief system. This has already been encouraged by multiple members of Congress who wrote letters to servicers urging consolidation, and several servicers are already promoting this action to FFELP borrowers. Student loan ABS trusts have seen a slight uptick in prepay rates in 3Q20, signaling borrowers are already using this route. A consolidation program would be positive for student loan ABS, as it would result in an increase in prepayments for FFELP student loan trusts, thereby shortening the average lives of FFELP ABS bonds.

While the headline risk surrounding student loan debt forgiveness and forbearance might sound negative for the sector, we believe FFELP ABS bonds would potentially benefit. ABS backed by in-school private student loans would also benefit, as borrowers who have both federal and private student debt would get their federal debt forgiven and free up cash flow to service the private debt. We believe holding FFELP student loan ABS is attractive because in our view the sector has further compelling upside relative to similar-quality alternatives. Faster prepayment speeds and improving quality of the underlying loans would improve the risk/return profile and increase expected total return for FFELP ABS.