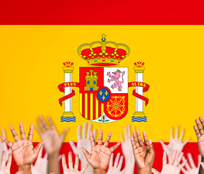 In our blog that was published in February, Thoughts on Spain’s New Coalition, we shared our belief that the coalition government led by Pedro Sánchez was likely to prove longer-lasting than many had believed at first. Since then, Spain has been hit extremely hard by COVID-19 in terms of its health and economic impact. In this follow-up post, we review and compare how the country has fared amongst its peers, consider the recently approved 2021 budget and reassess our investment view.

The Impact of the Pandemic

Exhibit 1 shows how severely Spain suffered during the initial outbreak during the spring. In response to an exponential growth of infections and a healthcare system that was being overwhelmed, drastic confinement measures were imposed as the only way to reduce the spread. The country was in focus again after the summer as it became the first to experience Europe’s renewed outbreak.

While comparable lockdowns and restrictions resulted in unprecedented contractions across the globe, Spain was affected more severely than its European peers (Exhibit 2), largely due to the importance of hospitality and tourism to its economy. Social distancing requirements, limitations on gatherings and forced closures weighed heavily on bars and restaurants, while travel bans and quarantine rules resulted in dramatic falls in the number of international visitors. To provide some scale of the impact, consider that three out of four workers in Spain are employed in the services sector, the country is the second most visited in the world and tourism contributes to more than 10% of GDP.

In our previous blog we noted that the fragmentation of Spanish politics and the pandemic has only sharpened differences. The government’s management of the crisis is certainly not without criticism; Spain eased restrictions too quickly, mass gatherings were permitted longer than they should have been and the decision to reopen nightclubs was a bad one. While divergent opinions on the best course of action have been a challenge for leaders of all persuasions everywhere, the wafer-thin majority of Spain’s coalition government posed a significant risk to a budget being passed, which has been both a source and illustration of political divisions in recent years.

Earlier this month, however, sufficient members of parliament did vote in support of the coalition’s budget, clearing the path for it to become Spain’s first full budget to be approved since 2016.

The expansionary budget increases social spending to soften the fallout from the pandemic, and allocates funds for education and healthcare. Tax increases are included for high earners and large corporations, levied on high-sugar drinks and single-use plastics, amongst other green taxes and a new digital tax.

Spain has indicated that it plans to use all of the EUR 140 billion allocated from the European Commission’s (EU) EUR 750 billion recovery fund over the next six years. Of the EUR 140 billion, EUR 72.7 billion is in grant form, of which EUR 27 billion has been anticipated in the 2021 budget. Member states have until April 2021 to submit plans detailing how funds will be used. Spain’s government has already been in discussion with the EU and set out the areas in which it plans to invest; most would be spent on education and training, digitalization, clean energy, and the modernisation of business, the health system and agriculture.

We have already shared our constructive view of Spanish government bonds and the subsequent overweight exposure in global portfolios. Spreads widened sharply against German government bonds following the outbreak of the pandemic, and subsequently tightened following forceful fiscal and monetary policy actions (Exhibit 3). The most important of these has been the European Central Bank’s (ECB) huge expansion of asset purchases in order to preserve accommodative financing conditions as governments’ borrowing needs increased. Spain’s yield advantage has resulted in a higher total return than comparable German government bonds.

While the scope for further spread compression may be limited, we believe that Spanish government bonds will continue to remain well supported by the current low-yield backdrop, accommodative monetary policy and extended forward guidance from the ECB.

As shown in Exhibit 1, Spain is forecast to confirm a much deeper contraction this year than its peers. Looking ahead to 2021, recent positive vaccine developments inject optimism that a successful deployment could see a faster-than-feared lifting of restrictions that many of the country’s key sectors require.

The public investment under the NextGenerationEU initiative should provide a further tailwind for growth in future years, and the 2021 budget approval is seen as a significant victory for Prime Minister Pedro Sánchez, likely securing his leadership for the next three years and providing political stability over this important period.