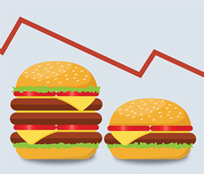 Notably absent in today’s release were benchmark revisions to previous quarters’ GDP estimates. As far back as I can remember, certainly at least for the last 20 years, the July GDP release has been the one in which the Bureau of Economic Analysis (BEA) announced benchmark revisions to GDP estimates going back a number of years. We will have to wait and see whether the lack of such revisions today reflects Covid-impaired data collection or some other issue. We certainly haven’t noticed any press release from BEA announcing a postponement of said revisions.

The fact of two consecutive quarterly declines in real GDP is sure to elicit various claims of recession. As reluctant as we are to agree with official talking heads, we have to do so on this count. Our take all along has been that the reported decline in 1Q22 was really due to bad data, an understatement of real growth that offset a similarly overstated growth number in 4Q21 (when BEA reported a strong 6.9% growth rate).

Average together the 4Q21 and 1Q22 reports, and you get 2.6% growth. We think that is a fair assessment of the two quarters combined, as inventory investment was way overstated in 4Q21, only to come back to ground in 1Q22.

The 2Q22 data were another story. Inventory investment declined again, subtracting from real GDP growth, but that was almost fully offset by an improvement in the trade balance, with the latter “improvement” thanks to a sharp decline in import growth. It only makes sense that imports and inventories would move in the same direction, as most of the swings in inventories indeed reflect swings in the flow of imported goods. That was NOT the case in 4Q21 or 1Q22, hence our skepticism about those quarters’ growth prints, but the two indicators did come back in line in 2Q22.

As a result, the main sources of decline in real GDP in 2Q22 were consumer and business spending on goods as well as construction activity across the board (i.e., residential, nonresidential and government). Those declines were large enough to drive a much larger decline in real GDP, but they were partially offset by still decent growth in spending and production of services.

This same contrast is most likely to hold in the second half of 2022. Construction will continue to decline, led by plunging homebuilding, and we are also likely to see further declines in consumer and business spending on merchandise. However, many services remain only partially recovered from the Covid shutdown, so there is the potential for further, relatively robust growth there. Whether real GDP in the second half remains negative or manages to eke out a slight gain depends on whether that continued recovery in services can fully offset ongoing declines in goods and construction.

Of course, an influencing factor in that development will be how hard Fed tightening bites into the various sectors. Services spending is not particularly interest-sensitive, but as declining output in goods and construction bite into income growth, that could—and likely will—have some downward knock-on effects on services. Meanwhile, a helpful factor would be a decline in inflation—that would allow better real growth out of every dollar increase in nominal incomes. Obviously, whether—and how soon—we get such help on the inflation front is a big question.