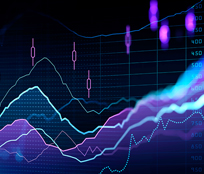 The Federal Reserve’s (Fed) mission to maintain credibility with its price-stability objective is helping to create the potential for the most attractive opportunity in public credit markets in the last 15 years.

With high-yield bonds and similarly rated bank loans offering yields of around 9%-10% at the end of October, public-market yields are very similar to those for private debt markets—this hasn’t occurred since 2007. Historically, there was about a 4% premium for private debt, but most recently the premium has collapsed when comparing to the JP Morgan High Yield Index with the most recently published data in June for Cliffwater’s Direct Lending Index, as shown in Exhibit 1 (A).

As the Fed continues to raise interest rates, this may create more opportunity to invest in higher yielding, shorter maturity bonds. Should yields continue to rise, either due to higher interest rates or wider credit spreads, the carry benefits might be advantageous even for investors with relatively short holding horizons. To illustrate this, a hypothetical future return analysis is shown in Exhibit 2. The high-yield credit analysis assumes yields rise by more than 3.5%, and default rates rise from around 1.5%, according to JP Morgan, to 4.5%.

With asset allocation reviews in mind as we approach the end of the year, investors may consider shifting some of their equity or private debt allocations to shorter maturity high-yield bonds. Given current valuations, high-yield credit return expectations could be similar or higher than those offered by equity markets and private debt, and with lower volatility and better liquidity, respectively.

Historically, when the Fed raised interest rates and market liquidity receded, those sectors of the economy where borrowing increased the most tended to have more challenges. Companies often face additional difficulties when they need to refinance their debt during times like this, when there is less confidence in economic growth and market-based measures of their assets have declined.

In addition, refinancing risk for middle-market and smaller companies in the private debt markets is higher than it is in either the syndicated bank loan market or high-yield credit market, according to Bank of America research. This research also suggests that nearly 20% of smaller company or middle-market debt matures before the end of 2024, which compares to around 8% for the bank loan market and less than that for high-yield credit.

The combination of declining asset prices and more uncertainty about growth will likely create some pain for private companies when they need to refinance their debt. As a consequence to private markets, high-yield credit may gain interest from investors that had earmarked allocations to private-credit strategies given private credits’ current unfavorable illiquidity and default risk premia. Historically, investors demanded a higher premium, typically around 4%, for less liquid investments that also have higher default rates.

Some investors may be reticent to invest in high-yield credit given concerns that valuations may become cheaper as growth slows. If spreads widen, high-yield returns may meet or exceed those of the equity markets, and we believe that at current yields investors are giving up a lot of income in an attempt to time the markets. As Bernard M. Baruch famously quipped, “Don’t try to buy at the bottom and sell at the top. It can’t be done except by liars.”

In Exhibit 2, we provide some guidance on expected returns should high-yield spreads widen and defaults increase. While we typically assume a holding period of three to five years, we show the estimated return over a three-year period for $100 invested in shorter-maturity high-yield bonds today.

The assumptions in the stress-return scenario include the following: high-yield spreads widen by 300 to 820 bps; 2-year Treasury yields rise by 75 bps to roughly 5.2%; 5-year Treasuries rise by 50 bps to 4.7%; and defaults increase to 4.5% per year, reducing returns by ~1.8% per year over the period.

As yields rise and spreads widen, there is an immediate decline in the investment value by a little more than 6%. However, with the income received, the investment value recovers in about eight months. Then, as proceeds from coupons and maturities are reinvested at higher yields, the annualized returns over the holding period are estimated at about 7.5%, even after incorporating higher losses from defaults; this return would still be higher than some asset allocation strategies’ capital market assumptions for equity and private credit over the next five years.

We advocate taking an active approach to high-yield markets. High-yield credit may have equity-like returns over the next three to five years, but likely with much less volatility than equity as history suggests. The risk/reward proposition is better in public markets today relative to private credit on average, and we will remain highly selective in private credit at least until we see an appropriate premium for the liquidity and default risk. That said, we are still finding opportunities in structured credit, CLOs, bank loans and very selectively in private credit. It helps to be more selective to avoid losses from default as financial conditions tighten and the economy slows.

At the end of October, the implied fed funds rate for 1H23 was approximately 5.0%. The shorter-maturity credit market yields may stay elevated either due to higher spreads or higher interest rates, but changes in the short term will remain sensitive to inflation and the Fed’s commitment to restore price stability. While the rate hikes are expected to bring short-term pain to economic growth, they may also be creating one of the most attractive investment opportunities in public credit markets that we’ve seen in the last 15 years.