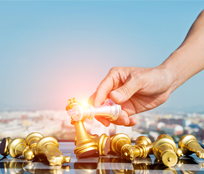 For the last two weeks plus, the Federal Reserve has been feverishly announcing policy initiatives intended to stem panic in the financial markets and in the economy. We think the direct credit market interventions announced by the Fed this week have the potential to be the most effective steps the Fed has taken in the past 30 years, possibly the most effective ever.

Why are these most recent steps so important? The fact is that wide swaths of the economics community believe Fed policy has had little (no?) effect since the onset of the global financial crisis (GFC) in 2008. The steps the Fed announced yesterday could work around that ineffectiveness and allow Fed policy to once again meaningfully influence the economy.

Monetary policy from the Fed, or from any central bank, works through the commercial banking system. Lower rates and larger supplies of liquidity are intended to stimulate bank lending and money creation, thence spending across the economy. However, the emergence of wide-ranging, stringent capital requirements for banks work to short-circuit that process.

Central banks can flood the banking system with reserves. However, reserves are not capital, and banks are unable to lend out plentiful reserves if their balance sheets are capital-impaired, as they typically are during a recession, or if banks are worried that their capital positions could become impaired.

For example, under repeated quantitative easings—QE1, QE2 and QE3—the Fed injected $3 trillion of liquidity into the US banking system. The result was a nearly equal increase in banks’ holdings of excess reserves, with no comparable acceleration in bank lending nor in the money stock nor in the pace of economic growth.

The latest initiatives have the potential to end-run these impediments. Again, the problem has been that the Fed injects liquidity, but banks sit on it. Well, the latest Fed moves effectively bypass the banking system.

The Fed, operating in effective partnership with the Treasury and Small Business Administration, will be lending directly to private-sector companies, via direct purchases of the corporate bonds of large companies and direct loans to smaller companies.

Furthermore, and perhaps as importantly, the Fed also seems to be effectively waiving the capital requirements on banks, basically giving them license to lend to individuals and companies without having to worry about capital adequacy, at least for a while. The announcements here have been both subtle and vague, as they would have to be given the strictures of various laws. However, banks are likely to get the message.

This is the way the financial system ran during crises/recessions prior to the Basel Accords and Dodd-Frank. Banks were allowed to get credit flowing to revive the economy, and capital concerns were generally put on hold until the economy had recovered. It appears that we are taking a step backward in time in order to move forward presently with the economy.

Finally, even while monetary policy had been stymied in its ability to directly stimulate the economy, it still had the ability to address disorderly market conditions. Again, there is little evidence that the QE of 2008-2014 directly stimulated economic growth, but it does seem clear to us that the Fed’s actions in the fall of 2008 to flood the financial system with liquidity did stem the market panic at that time.

In disorderly markets, any semblance of normal trading disappears, price discovery and valuation essentially cease, and what trading does occur proceeds in a near-vacuum. By providing market liquidity and by engaging in a few, selectively targeted trades, the Fed can restore order to markets.

It did so successfully in late-2008 in the fed funds and commercial paper markets, and, eventually, in the Treasury and corporate bond markets. Now, with its stated intention of directly purchasing corporate bonds, the Fed appears ready to work to directly calm markets that are presently frayed as much as they ever were in the dark days of 2008.

Some analysts are complaining that the $30 billion or so of capital currently amassed for these operations is too small. We believe this attitude is myopic. Again, disorderly markets are an altogether different phenomenon. It doesn’t take a lot of funds withdrawn from the market—at the right (meaning “wrong”) time—to drive them into chaos.

By the same token, it doesn’t necessarily take much trading to restore market order, precisely because trading is occurring in such a vacuum. Furthermore, in any case, our sense is that now that the Fed and Treasury are embarked on this course, Congress will provide them whatever “ammunition” they need to see it through.

Yes, all of this raises issues of government/Fed bailouts and a creeping Fed/government takeover of the economy. For now at least, those concerns are being ignored, for better or worse in the long run.

In closing, the two charts here may be instructive. The first chart shows TBond and Long Baa bond yields during the GFC. You may not recall that Fed operations did not inject a single dollar of liquidity into the system until September 15, 2008, the day Lehman, AIG and others failed. After that day, the Fed opened the spigots freely. TBond yields had NOT declined much in the early days of the crisis, despite the economy falling into recession in November 2007. Indeed, it wasn’t until November 2008 that TBond yields began to decline meaningfully, and long corporate bond yields soon headed down, after having soared previously.

In other words, the liquidity squeeze did not end immediately when the Fed started flooding the system with cash. However, as this flood accumulated, TBond yields did eventually work their way lower, and corporate yields declined not long after.

Now, flash forward to current events. Obviously, TBond yields INITIALLY declined from the early days of late-February when virus fears first proliferated. Notice that over that period, corporate bond yields dropped as well. Yes, option-adjusted spreads were widening, but at least corporates showed SOME duration. It was on about March 9, 2020 when a liquidity crunch really set in. Corporate yields went vertical then, and even TBond yields rose—with yet sharper yield increases for off-the-runs and TIPs.

So, what began as an economy-based panic devolved/expanded into a liquidity panic as well over the last two weeks. Yes, the Fed has been quicker on the draw presently and quicker in expending the “reach” of its operations than it was during the GFC. Hopefully, this will allow for a quicker disposition of at least the panic-related aspects of the recent selloff. The economic loss aspects will be harder to dislodge, but addressing panic is never a bad thing.