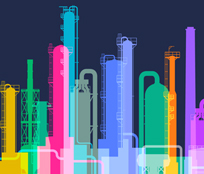 This year is off to a tumultuous start to say the least, with volatility increasing in commodity markets. Leaving 2019 there was a semblance of stability creeping in that was welcomed by commodity markets. Oil demand growth was still present albeit at a slower pace, OPEC and Russia were continuing to maintain supply cohesion and non-OPEC supply growth was expected. This essentially placed a cap on prices but management teams were still able to lower price decks. Following the 2015/2016 rout, managements made real strides in operating efficiencies (to lower break-even prices), repairing balance sheets, extending out maturities, bolstering liquidity and target managing to within cash flow—essentially providing a runway.

The combination of these shocks means the global energy sector is facing a period of lower realized prices, uncertainty, rising leverage and likely shrinkage with the larger, lower cost, better-capitalized companies surviving. What complicates matters are the unknowns around the magnitude and duration of these shocks.

Key Issues We Are Focused on in Investment-Grade (IG) Energy

Capital budgets are under scrutiny (again) – Budgets had been managed downward in 2019 versus 2018 and we had seen more downward revisions in 2020 compared with 2019 (but less so than previous cuts). More budgets cuts are likely to reduce the amount of negative free cash flow at prevailing prices.

Capital markets – Unlike the high-yield (HY) market, IG energy issuers have enjoyed more open markets and we have seen managements proactively manage their capital structures. Unfortunately, now, those that did not hit the refinancing window will be left behind. Much refinancing has already occurred, so 2020 looks lighter (excluding larger integrated companies), but focus would turn to those needing financing to fund negative free cash flow and those with maturities in 2021.

M&A – Mergers are always a talking point and we have not seen as many as one would expect to date. With debt financing essentially closed and a weaker equity currency, it will be harder to do and a longer-term investment horizon would be taken by acquirers to make it work. However, the larger players may begin to step in as they need to overcome the disappointing organic reserve replacement they have had to endure.

Rating agencies – Rating agency commodity price assumptions will be downgraded if they have not already been. Rating agencies had been reluctant to upgrade the sector/issuers (with the exception of more one-off situations) despite the self-help management employed over the period since 2014-2016. Ratings downgrades will be a forgone conclusion in the new price environment, particularly in the exploration and production (E&P) sub-segment while midstream companies are likely to experience negative outlooks than outright cuts, initially.

Key Issues We Are Focused on in HY Energy

Liquidity and revolving credit facility access – E&P companies are presently undergoing bank facility “redeterminations,” which occur twice yearly (in spring and fall), whereby lender banks and the E&P company renegotiate credit facility commitments based on the present value of proven reserves. We believe the banks will follow a similar playbook as they did in the 2015/2016 cycle, reducing industry exposure overall and incentivizing deleveraging within specified timeframes. Additionally, we note that banks have been reducing commitments and exposure slowly over the past two years given the volatility in commodity prices, sustained lower price, and general energy risk-reduction practices.

Our base case expectation is for banks to restrict capital further either by 1) reducing advance rates on proved reserves and/or 2) applying lower long-term commodity price assumptions in the present value calculations. However, we note that most “commitment” levels today are well above the “elected” company amount, meaning there is room for banks to optically cut commitments, in some cases quite substantially, without reducing a company’s liquidity. Unrealized hedge gains are also factored into credit facility calculations, and with substantial 2020 hedge positions for most issuers, these gains provide additional cushion in a falling commodity price environment. We do not believe the goal of banks is to force the liquidation of assets into a down market.

Energy capital markets – In contrast to the prior 2015/2016 cycle, we believe external capital is more difficult to source, which could potentially force management teams to make difficult decisions around either restructuring or forcing self-help refinancings to deal with near-term maturities. While secured capacity exists with most issuers, we believe there is very limited appetite for secured offerings at acceptable terms.

Default risk – Our current estimate for 2020 is about 10%, not including “selective defaults” as described by S&P. We do not believe the move in crude oil prices materially increases 2020 defaults at this time. The duration of the downturn is the key variable, but we acknowledge there exists jump-to-default risk in a few, well-identified companies or energy subsectors that were borderline/barely surviving before the crisis. We would expect a large increase in 2021 default rates should the price downturn extend well into 2021.

M&A – Stronger HY energy companies will likely pivot to scale up defensively with BB rated peers or seek out IG E&Ps looking to avoid downgrades to below-IG. In both cases, we believe mergers can materially reduce cash costs per barrel. Weaker single B combinations can make financial sense but are difficult to do given change of control provisions in debt securities and lack of existing equity values.

Rating agencies – We expect a repeat of 2015/2016 as rating agencies move quickly to match their commodity price assumptions to the curve likely resulting in multiple-notch downgrades for all issuers. We believe the agencies will be particularly harsh on E&P companies, in contrast to midstream companies that are likely to be given more time to develop deleveraging strategies (e.g., dividend cuts, asset sales, etc.).

This continues to be a very fluid situation and there remain many unknowns given macro and geopolitical headwinds. We remain vigilant of the ever-changing dynamics and will keep you posted on our views as new developments arise.