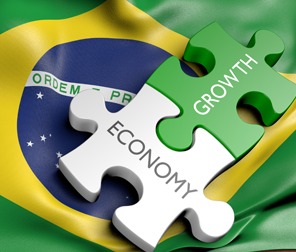 Western Asset recently cut our 2019 GDP growth outlook for Brazil to 1.3% from 1.9%. The move came on the back of weaker-than-expected data for 1Q19, and underscores the frustratingly sub-par pace of expansion over the last three years. As a comparison and according to a central bank survey, the consensus forecast has downshifted to 1.2% currently, from 2.5% as of year-end 2018. Importantly, our revised forecast still carries a negative bias, reflecting a slew of challenges facing the country.

First, the spillover impact of economic shocks continues to linger. Over the past year, there has been a series of negative events that weighed on domestic activity. Exogenous factors included Fed tightening, economic contraction in neighboring Argentina and most recently, trade tensions between the US and China. Domestically, the trucker drivers’ strike and the presidential election affected business sentiment.

Second, there remain significant hurdles to implementing the much-needed structural reforms. Notwithstanding the strong liberal credentials of President Bolsonaro’s economics team, the willingness and ability of the new government to build a stable majority in Congress, and consequently approve comprehensive reforms, are still in question. Indeed, further reform delays will present a drag on current growth and possibly on 2020 growth as well.

Third, the scope of accommodative policies is limited. Fiscal stimulus is unlikely for now. Former President Temer had previously approved a constitutional amendment, called the fiscal “expenditure ceiling” law, which set a limit for the growth of federal government spending to the prior year’s inflation rate. The resulting downshift in aggregate demand has not been offset by larger private sector growth. On monetary policy, despite the historically low level of the policy rate, market volatility and currency depreciation have tightened financial conditions.

We still see room for further cuts in the policy rate, by 50-75 bps from 6.50% currently. The soft patch in growth, coupled with well-anchored inflation expectations, will likely propel the central bank to reconsider its current “wait-and-see” approach. One interesting observation is that despite apparently strong monetary stimulus, capacity slack and high unemployment persist. In our view, we believe the assumption of Brazil’s neutral rate, r*, could have fallen by more than the central bank’s assumption, resulting in less stimulus than is anticipated.

Our key investment implication is centered on the appeal of local rates, particularly in the front end of the nominal curve. Further easing has not yet been priced in. Regardless of the outcome and the time of economic reforms, we believe additional rate cuts are necessary to counter the cyclical growth challenges. We are also constructive on long-term, inflation-linked securities.