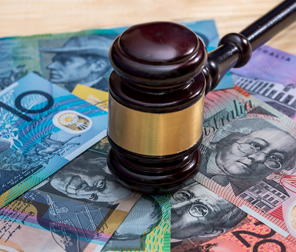 On the 9th July 2019, the Australian Prudential Regulation Authority (APRA) released its final decision on the form of capital that will make up part of the Total Loss Absorbing Capital (TLAC) for its domestic systemically important banks (D-SIBs), which comprise the four major Australian banks. Following a consultation period, APRA made some modifications to its original proposal, but has decided to stay with the current Tier 2 instrument to fulfil the additional capital requirement.

APRA have reduced the quantum of additional capital required from a previous level of 4%-5% of risk-weighted assets (RWA) to 3% and extended the period for the capital build to the 1st January 2024. APRA has indicated that the remaining 2% of additional capital required for its TLAC target can be considered at a later date. In essence, a typical capital structure for an Australian D-SIB will look like the following:

The decision to stay with Tier 2 seems partially driven off the fact that APRA has no authority to introduce a senior non-preferred or a Tier 3 security, the establishment of which would require the government to pass legislation to enable the Banking Act to be modified. An additional concern for APRA was the potential ratings implication for the current senior unsecured ratings, where the rating agencies have typically reduced implied government support when senior non-preferred securities have been introduced into the capital structure.

To this point, post APRA’s announcement S&P placed all four major banks back on Stable outlook. S&P require that the important principles underlying APRA's plan remain unchanged compared with the proposal it announced in November 2018. The main difference is that APRA has set the target additional amount of loss-absorbing capacity by Jan. 1, 2024, to a reduced 3% of regulatory RWA compared with 4%-5% in the previous proposal. S&P expect that the banks would predominantly use Tier 2 capital instruments to strengthen their loss-absorbing capacity. Increased loss-absorbing capacity could lessen the need for the Australian government to provide financial assistance to banks in a stress scenario and thus lessen the financial burden on taxpayers. Nevertheless, S&P believe that this plan does not introduce any policy or process impediments to the government bailing out a D-SIB, in the unlikely event this was required. Nor does it suggest any diminution in the Australian authorities’ willingness to do so.

From a market perspective, on current RWA, the banks will need to issue an additional AUD 50 billion in Tier 2 by the 1st January 2024. This is more than double the current outstanding of approximately AUD 40 billion to a total of AUD 90 billion. In round numbers, each bank will be required to do a AUD 3 billion Tier 2 deal each year in addition to refinancing their existing securities.

This is unprecedented volume; however, in current market conditions it does not seem unrealistic. Tier 2 remains reasonably rated with S&P at BBB, Moody’s at Baa1 and Fitch at A-.

The additional volume of Tier 2 will see a commensurate reduction in Senior Unsecured issuance, all things being equal. Post the announcement, Tier 2 initially moved out 20 bps, but it has since recovered those losses. Also post the announcement, 5-year senior bank notes have moved in 6-8 bps to 70 bps, reaching a new post-GFC tight.