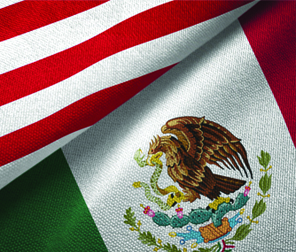 Last night, President Trump announced via Twitter that on June 10 the US would impose a 5% tariff (with the potential for further increases) on all goods coming into the US from Mexico until the “illegal migrants” transiting through Mexico into the US are stopped. This development was largely unexpected by investors and political consultants. These events also transpire at a time when the Mexican and Canadian governments were presenting the US-Mexico-Canada Agreement (USMCA) to their governing bodies for ratification and in advance of a push here in the US to consummate the deal. An already challenging outlook for Mexico (1Q19 contraction and ratings downgrades are on the horizon) appears to have hit another stumbling block.

The imposition of tariffs increases the uncertainty regarding a near-term ratification of the USMCA. While itself less significant than a US-China resolution, it would help business confidence and avoid what could be a potential hit to Canada and Mexico. For Canada, the biggest factor impacting Canadian trade this past year has been pipeline capacity for its crude production in Western Canada. The lifting of steel and aluminum tariffs was a welcome development but, by itself, will have only a modest stimulative effect for the Canadian economy. For Mexico, preserving the trade linkages with the US will help sustain economic activity, although growth prospects will continue to be limited by a tight monetary policy.

Leaving aside the legality of a potential tariff on “all” Mexican goods into the US (our understanding as it relates to NAFTA and other trade agreements limits tariffs to a more formal process), and similar to the impact of tariffs on China, higher prices in the US, lower margins for importers/exporters, some currency weakness and supply chain shifts will bear the brunt—the magnitude of these impacts will depend greatly on the size and duration of the tariffs implemented. In the case of China, empirical evidence thus far suggests that the US consumers are paying the bulk of the tariff increase. In addition we are seeing an acceleration of trends where US importers are looking for capacity/supply chains outside of China. Unlike the US/China trade relationship, our understanding is that in the US/Mexico relationship, goods cross the border multiple times before completion—this relationship applies to the auto sector in particular. This dynamic could make even a relatively small tariff of 5% considerably more disruptive for some US/Mexican companies. We suspect the US business community will be forceful on this issue as it was during NAFTA/USMCA negotiations. Also of note, and unlike the bipartisan hawkishness toward China in the US, there is bipartisan support for Mexico/trade relations. Already this morning, we have seen bipartisan pushback on the tariffs in addition to business groups coming out in opposition to the moves.

No doubt, Mexico was blindsided by President’s Trump tweet, and to Mexico’s credit, the response from President Andres Manuel Lopez (AMLO) has been “measured” thus far, which stands in contrast to the more confrontational tact by former President Peña Nieto. Of note, AMLO stated this morning that Mexico plans to continue to press forward with USMCA ratification and expects to address issues with the US via dialogue. In our opinion, the Mexican response so far leaves plenty of room for both sides (the US and Mexico) to show flexibility without losing “face” and ultimately some form of negotiation/dialogue/middle-ground is likely where this dust-up will conclude.

As expected, Mexican asset prices are weaker on the headline. The peso is off 3.0%, Mexico sovereign is 10 bps wider, Pemex is 15 bps wider and most private sector Mexican issuers are 7 to 10 bps wider. We expect the Mexican peso’s ride to be bumpy, favor local rates (given that Mexico’s central bank can be dovish either due to trade frictions or sluggish economic growth)—we just need to see core inflation show some improvement.