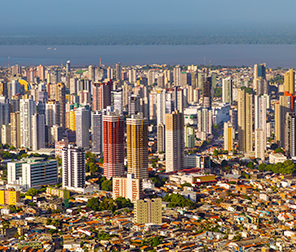 Estimating the Impact of COVID-19 on Brazil’s Economy

Similar to other countries, Brazil is bracing for an impact from COVID-19 that could be even worse than what its economy experienced as a result of the 2008 great financial crisis (GFC). Despite the measures that Brazil’s central bank (BCB) already announced to prevent a major collapse of the credit market, alongside the government’s fiscal response to the pandemic, we believe there will be a significant slowdown in Brazil’s economy in 2Q20. In the most likely scenario, the swift contraction will be followed by a sharp recovery in subsequent quarters. We now expect that the effects of COVID-19 will lead to a GDP contraction of 1.2% in 2020, down from our previous forecast of +2.2%. The risks remain to the downside, and we cannot yet rule out a longer economic shutdown, which could possibly lead to a deeper recession.

During the GFC, Brazil’s GDP collapsed 3.9% in 4Q08 quarter-over-quarter (QoQ) on a seasonally adjusted (sa) basis, followed by another contraction of 1.6% in 1Q09. That was followed by a V-shaped recovery in the following quarters.

Now we are expecting an even more significant contraction of 8% in 2Q20 (QoQsa) due to the lockdown of almost all sectors except the most vital (e.g., food production, food retail, health care and public transportation). While this is still dependent on the duration of the current lockdown, we believe such a sharp contraction would be followed by a sharp rise in GDP of 6.5% in 3Q20 (QoQsa), and then by a gradual recovery in the following quarters. The risk in this scenario—in addition to the duration of the lockdown—involves the uncertainty surrounding the recovery of the services sector, which tends to suffer more with rising unemployment. As a result, this sector typically responds more gradually to the incentives already announced (no inventory adjustment). Given the facts known today, we anticipate GDP growth of 4.7% in 2021 (versus 2.6% in our previous scenario).

Policy responses in Brazil so far have been twofold: monetary and fiscal. On the monetary side, BCB has announced actions on several fronts, from interventions in the FX markets (e.g., large-scale US dollar sales in the spot markets, trade and swap lines in hard currency, among others) to providing liquidity to credit markets. Additionally, the Monetary Policy Committee reduced the SELIC rate (policy rate) by 50 bps last week, to 3.75% (annual rate).

We anticipate further SELIC cuts in the coming months, of 50 bps or more. In addition, we assume that overnight rates will remain at this lower level at least until 3Q21, with a very gradual normalization taking place only through 2022. In the short run, we also anticipate the BCB will continue to provide FX liquidity via multiple instruments and will continue to focus on financial system liquidity and the current dysfunctional credit markets.

On the fiscal front, the government promptly responded to the COVID-19 crisis by deferring part of the labor tax costs for three months, anticipating the 13th wage benefit for retired people and increasing the social transfers to informal workers. The government has also announced that it intends to increase the number of families assisted by the so-called Bolsa Família (families whose income is below a certain level per capita). Pending further details, the government has also announced new transfers to local governments to help face the increasing needs of the health care system.

The legislative branch is also responding to the crisis. On March 20, the Congress approved a “State of Emergency” declaration, which allows the federal government to increase public expenses to address the COVID-19 pandemic beyond the cap imposed by the constitution. So far, the government has not detailed further actions, but we expect more clarification in the coming days.

An important point of concern is how this crisis will affect the long-term fiscal adjustment that has been in place since 2016. Key members of the economic team have made clear that the focus will be to present the current measures as “one-off” expenditures, which will not compromise fiscal consolidation in the long run. According to their plan, the government will focus its fiscal strategy to absorb extra health expenses and social transfers, while postponing tax collection only during a limited period of time (months, not years).

In summary, our base case scenario follows our general expectations for the US economy: a sharp decline in GDP followed by a rebound. Our estimates for Brazil assume a major deterioration of the primary deficit, from our previous forecast of 0.7% of GDP to around 3.5% this year. We assume, however, that fiscal accounts will be moving back to a deficit of around -1% in 2021. Despite a higher deficit and lower growth, we believe the debt-to-GDP dynamics would face just a minor setback in the next two years, moving back to the previous trajectory by 2022.