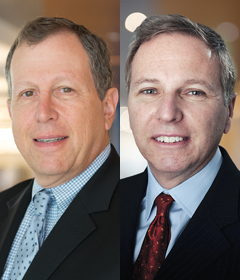 On November 8, 2016, Donald Trump was elected president of the United States. The result was a shock to most, possibly including Mr. Trump. Most—although not all—opinion polls pointed to a Hillary Clinton win. Betting markets were even more unequivocally pro-Clinton. Prediction markets such as the Iowa Electronic Markets were rather accurate, but you had to read the fine print: they were tied to the popular vote and not to the Electoral College.

Like the man whose feet are in the oven and whose head is in the freezer—he dies although on average his temperature is perfectly normal—an election’s outcome is something that cannot be averaged. Thus our scenario analysis was intended to capture the short-term shock effects of the information that would be revealed by the election. Longer-term effects are still playing out in the normal course of information discovery.

In terms of election night itself, the Trump victory became apparent only after US and European markets were closed; the extremely short-term and immediate reaction in Asian markets was a classic, and severe, flight-to-safety response. US Treasuries shot up in value, while S&P 500 futures plummeted. This continued as markets opened westward, but by the time the US opened, the response had already moderated and, by the end of the US trading day on November 9, 2016, the overnight response had reversed. US 10-year Treasury rates were up 20 basis points (bps) from the US close on November 8 to the US close on November 9, while the S&P 500 was up 1.1%.

In this note, we’ll discuss our scenario analysis process using this US election as an example. We think it is valuable to show clients how we approached such a classic binary market event. We knew that some of our assumptions would turn out to be incorrect, but we needed to make our best efforts to understand what might happen to our clients’ portfolios. From a risk management point of view, we wanted to know if the downside of being wrong was severe enough to warrant paying for a hedge. We concluded that being wrong would of course be negative, but not outside of client risk tolerances.

It is difficult to translate a narrative description of an economic scenario into specific movements of financial market variables. For example, suppose we want to consider what might happen if a central bank policy error leads to overheating of the US economy. What exactly would that do to credit spreads on European telecoms? Even if we stipulate a particular outcome, reasonable people can still differ on how that outcome could play out in the markets.

Pre-election, our perspective was that given the US government’s system of checks and balances, the winning presidential candidate would be only part of any reasonable narrative. The most likely outcome was that the winning candidate would be able to implement only a portion of his or her positions, such that any change would be slow and incremental. Slow, incremental change is within “center of the distribution” risk, i.e., risk that is described by ordinary statistics.

As we contemplated election-related scenarios, we disciplined ourselves to consider what we thought would be low-probability but high-impact outcomes. We therefore set ourselves the task of playing out the short-term financial market impacts of unadulterated implementations of US presidential candidate policy positions: what if the winning candidate were able to fully realize his or her stated plans? We then wanted to broadly estimate the behaviors of our clients’ portfolios should these scenarios occur.

We gathered opinions on presidential candidate policy impacts from a number of external sources1 as well as from Western Asset portfolio managers and sector specialists around the world. Consistent with the election itself, there was little that could be called a consensus in the financial industry. In statistical terms, the standard error of our estimates was very high.

Some broad themes were visible, although it would be unfair to say that any opinion was universally or even widely held. There was more of a tilt toward expectation of change and uncertainty under Trump, and more toward business-as-usual under Clinton. Further, there seemed to be an expectation of fiscal expansion under Trump. The authors of this note made their best efforts to assess numerical outcomes from the various sources we consulted, aiming for a “middle-of-the-(Wall)-street” approach.

So as not to give ourselves the benefit of hindsight, in the appendix we reproduce verbatim our pre-election scenario specifications.

In advance of the election, we ran these assumptions through representative portfolios across Western Asset’s product range. In order to put the results in context, we scaled the outcomes into units of target excess return. For example, a conservative portfolio might aim for 50 basis points (bps) per year of outperformance over its benchmark. An aggressive portfolio might aim for 400 bps of outperformance, or 400 bps of absolute return if it had no benchmark.

From Exhibit 1 we can see that all the representative portfolios were projected to lose less than two years of targeted excess return in a Trump victory scenario.2 The Clinton victory scenarios—the accuracy of which we will never know—were far milder. Two lost years of excess return—while certainly undesirable—is not a statistically extraordinary move for a scenario. These types of moves are, for example, mostly smaller than the moves we observed in our Brexit scenario. In fact, given the great uncertainty about our assumptions, for most of these results it was very hard to say that they were significantly different from zero.

To the extent that it was possible to make such a conclusion given the many contingencies involved, we concluded that the aggregate analysis we collected led to surprisingly muted immediate economic consequences of the US presidential election, even under the deliberately extreme assumption of unfettered policy implementation. This convinced us that preemptive repositioning of portfolios was not desirable—if we were wrong about a Clinton victory (which we were), it would be painful but not beyond our accepted range of outcomes.

In our pre-election analysis we speculated—incorrectly, as it turned out—that if the market was wrong-footed as it had been with Brexit, and the result was the opposite of expectations leading into the vote, then moves could be more violent. The market was certainly wrong-footed, but the day-over-day result was mostly directionally in line with our assumptions, albeit more muted.

Exhibit 2 summarizes the one-day results from close November 8 to close November 9. The US and UK curves bear-steepened as we expected, but far less severely. The Mexican curve had a parallel up-shift almost exactly the way we anticipated, and the Japanese curve got a flight-to-safety bid as expected, although a very mild one. We expected both US spread tightening and a rise in breakeven inflation. Both of these occurred, but on a smaller scale than we expected.

In FX, the results were mixed. We were right that key campaign targets such as the Mexican and Chinese currencies would suffer, but the impact was more muted than we expected, especially in China. We were just plain wrong about the idea that the yen and the euro would rise: in fact, dollar strength was a more important factor. The euro curve was also a surprise—we expected a flight-to-safety bid, but instead it experienced a move that was mildly sympathetic with the US curve.

Thus the estimates shown in Exhibit 1 were, as intended, overly pessimistic. Actual one-day moves observed in our portfolios were less severe than our stress scenario suggested.

Because of the possible wide-ranging impact of the US presidential election on November 8, we constructed Trump victory and Clinton victory scenarios as part of our risk management process. We had constructed a similar scenario analysis for the Brexit event in June 2016, and we applied the lessons we had learned from that experience. We synthesized a large amount of sell-side research, and expert opinions from Western Asset desks around the world. Still, we knew that many of our assumptions would turn out to be wrong.

The pre-election results of the stressed scenario testing convinced us that even if we (and the market) were wrong about a Clinton victory, the effects on our clients’ portfolios would mostly be negative but not outside of client risk tolerances. In the actual event, although some of our assumptions were wrong, the short term market reaction was broadly in line with what we had expected and the impact on our client portfolios was more muted than our stress scenario had suggested.

It would be nice to always be right. Until that happens, it’s important to figure out what might happen if we’re wrong.

We start with interest rates. We imagine a US curve bear-steepener on a Trump victory, with the short end of the Treasury curve rising 20 bps and the long end rising 50 bps. This is based on the assumption of fiscal expansion under Trump and his stated opposition to the Federal Reserve’s (Fed’s) low-rates policies. On the other hand, under Clinton the Fed is anticipated to continue to move cautiously, resulting in a parallel 10 bps rise in the US curve. Under Trump, our London office anticipates German and Swiss bonds getting haven bids, leading to us lowering the euro and Swiss curve by a parallel 10 bps under Trump. The UK curve is expected to bear-steepen 5 bps short end/12.5 bps long end under Trump. Under Clinton our London office anticipates yields unchanged in euro, Swiss and UK curves.

Elsewhere, we included a 10 bps parallel drop in the Japanese and Swiss curves on a Trump victory in a flight-to-safety response, and a 10 short/30 long bear-steepener in the Australian, Canadian and New Zealand curves. We included no impact on Japanese, Australian, Canadian and New Zealand curves under Clinton. In emerging markets (EMs), we anticipate a 40 bps parallel rise under Trump and a 10 bps parallel rise under Clinton.

As far as credit spreads, Trump is expected to aim for fiscal expansion. Extrapolating from that and other Trump policies leads to an assumption of 25 bps tightening in US investment-grade and high-yield credit spreads across the board in the immediate aftermath of a Trump victory. Note that together with the anticipation of a 50 bps rise in the long end of the curve, this means that overall long-end yields in these areas would rise. On the other hand, a Clinton victory is presumed to lead to far more severe pressure on financials and therefore to a 50 bps spread-widening.

For breakeven spreads, once again the Trump fiscal expansion theme is anticipated to lead to higher breakeven inflation (BEI), namely a 50 bps parallel rise in the US BEI curve. Clinton on the other hand would represent a continuation of the status quo with a slower BEI rise, namely 10 bps parallel.

Similar to our assumption of weaker EM currencies under Trump, we would anticipate EM and peripheral European sovereign spreads to widen by 50 bps and 25 bps, respectively. Under Clinton we included no change in these spreads.

Market variables not mentioned were not changed in either scenario, although in practice many of these variables would move in sympathy with the shocked variables.

Kenneth Winston, PhD, is Chief Risk Officer at Western Asset and has over 28 years of experience. Mr. Winston joined the Firm in 2008 after serving for 4 years as Chief Risk Officer at Morgan Stanley Investment Management. Formerly, Mr. Winston served as Senior Investment Officer at Oppenheimer Funds, Inc.; as Principal, Risk Analysis at Richards & Tierney, Inc., and as Principal, Director of Research and CIO at Balch Hardy Scheinman & Winston, Inc.

Roberto Apelfeld, PhD, is Head of Global & Non-US Portfolio Risk at Western Asset and has been with the Firm since 2005. Previously, Mr. Apelfeld was Head of Investments and Country Business Manager at Citigroup Asset Management and Vice President at J.P. Morgan Investment Management.