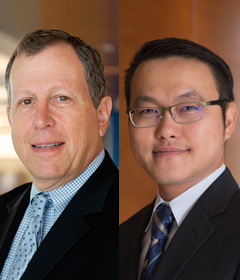 Ms. Wongtrakool’s white paper discusses the interplay between the mortgage, corporate and US Treasury sectors of the Bloomberg Barclays Aggregate Index. She notes that “the rally in rates over the past two years should have lengthened the duration of the Aggregate index, but in fact it...hardly changed at all.” In this paper we’ll explore why for some indices, the relationship between rate changes and duration changes can be the opposite of what we would expect to see for an ordinary bond. There are many factors that lead to duration changes in portfolios: Ms. Wongtrakool highlights the changing composition of the Aggregate Index. This paper highlights an additional factor: the relationship between duration and convexity.

The Relationship Between Rate Changes and Duration Changes

Why should a rally in rates (that is, rates going down) make a portfolio more sensitive to changes in rates? Let’s think about a bond paying two $2 coupons a year and returning $100 principal in 10 years, i.e., a 10-year 4% coupon bond. Intuitively, that final $100 principal repayment becomes less and less important in present value terms at higher and higher discount rates. Exhibit 1 shows this bond’s modified duration in years as discount rates (the rates at which future cash flows are discounted to the present) change.

So as rates go up, modified duration goes down. Or as Ms. Wongtrakool indicates, as rates rally (that is, as we move from right to left in Exhibit 1), duration lengthens.

We can summarize the moves in Exhibit 1 as rates-up-duration-down. That’s a good thing—if we could lower duration just before rates go up, then the portfolio would suffer less capital loss. On the flip side, if we could increase duration just before rates go down, then the portfolio would benefit more from capital gains. Exhibit 1 shows that the underlying 10-year 4% coupon bond does this automatically. That phenomenon is usually what we associate with positive convexity. It means that you don’t need a crystal ball to adjust durations the right way—the bond does it for you to some extent.2

From a Bond to an Index

Now let’s move from the simple bond to the more complex Aggregate Index. If we plot changes in rates against changes in the Aggregate Index’s duration, we should get a downward-sloping line (rates-up-duration-down). Exhibit 2 shows this plot over the last 20 years.

The red regression line is clearly NOT downward-sloping. In fact the statistics indicate that this upward-sloping relationship has been reliable over the last 20 years.

Exhibit 3 shows that over the last 20 years, the Aggregate Index’s duration-squared term has ALWAYS been greater than its convexity, even when the convexity was positive.3

So the critical quantity D2-C was always positive over the last 20 years. In that case, shouldn’t we have always seen rates-up-duration-up? In other words, in Exhibit 2, all the dots (representing months) should either have been in the upper right quadrant or the lower left quadrant. In fact, 195 months were in these quadrants, but 45 other months were in the off-diagonal quadrants.

The reason for these rates-up-duration-down (or rates-down-duration-up) dots is that the Aggregate Index is not a monolithic entity whereby all securities respond to the same discount rates, nor (as Ms. Wongtrakool points out) was its composition constant. The index composition changes that she discusses can overwhelm the mathematical relationship between duration and convexity of a single security.

Exhibit 4 repeats the analyses shown in Exhibits 2 and 3, but now applied to the Bloomberg Barclays U.S. Mortgage-Backed Securities (MBS) Index instead of the Aggregate Index. US residential MBS have reliably large negative convexities because the holder of the security cedes prepayment options to mortgage borrowers. As a result, the key quantity D2-C is reliably and significantly positive. This leads to an even stronger rates-up-duration-up relationship than the one displayed by the Bloomberg Barclays U.S. Aggregate Index.

For the opposite effect, consider the Bloomberg Barclays U.S. Credit Index. That index has always had positive convexity that was greater than duration-squared. As a result, the quantity D2-C was always negative, just as it would be for an ordinary bond. We therefore tend to see more of a rates-up-duration-down pattern like the one in Exhibit 1.

Sometimes the relationship between rate changes and duration changes is just murky. The Bloomberg Barlcays Global High-Yield Index shows no discernable pattern over the period 1998–2016 in Exhibit 6. This is because the quantity D2-C was insignificantly negative for about two-thirds of the analysis period, and was insignificantly positive the rest of the time.

Investors and portfolio managers need to take into account many factors when anticipating the effects of rate changes on their portfolios. The composition changes that Ms. Wongtrakool highlights, as well as the relationship between duration-squared and convexity, can have profound influences on portfolio behavior.

By definition, duration (“D”) is the opposite of the fractional rate of change of prices with respect to changes in rates:

where P means price and r is the discount rate. Convexity is similarly defined as the second derivative:

To find the rate of change of duration with respect to changes in rates, we need to take the derivative of both sides of equation (1):

Thus, an instrument will certainly have increasing duration as rates increase if its convexity is negative. But it may even exhibit this phenomenon if convexity is positive, depending on the relationship between duration-squared and convexity.4

Kenneth Winston, PhD, is Chief Risk Officer at Western Asset and has over 27 years of experience. Mr. Winston joined the Firm in 2008 after serving for 4 years as Chief Risk Officer at Morgan Stanley Investment Management. Formerly, Mr. Winston served as Senior Investment Officer at Oppenheimer Funds, Inc.; as Principal, Risk Analysis at Richards & Tierney, Inc., and as Principal, Director of Research and CIO at Balch Hardy Scheinman & Winston, Inc.