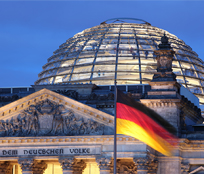 The German Federal Elections in September 2021—A Primer

In this blog entry, we set out our early views regarding topics, parties and candidates for the German elections on September 26, 2021, and the potential implications for markets. We plan to update these views as we get closer to the election date and polls crystallize. To put this election into perspective: it will lead to (only) the fourth German Chancellor in about 40 years, and the Green Party/movement will likely end up in a G4 government for the first time.

With COVID-19 likely to be largely in the rearview mirror by the time of the elections, the dominant theme will be climate change, including questions around the target date for climate neutrality, and carbon pricing. Unsurprisingly, this is a topic that the German Green Party (and affiliates elsewhere) has espoused for a very long time. In fact, some of the Greens’ current success in the polls can be attributed to the combination of rising importance of environmental topics in public opinion and the fact that a relevant political party exists in Germany, contrary to many other large economies. As climate change has been identified as the make-or-break topic for these elections, other German parties are partly converging toward the Greens’ current positions.

On the domestic side, key topics also include the labor market, where increases to the minimum wage will figure prominently, as well as housing policies (rent ceilings in attractive cities such as Berlin and Munich as well as the supply of social housing). While fiscal strategy and public investment are important though somewhat technical topics without broader appeal, they are certainly of great market relevance regarding: (1) whether and how the German debt brake rule—a constitutional provision—should be remodeled to allow a more expansionary fiscal stance; (2) whether to exclude public investment from this rule as it is supply-enhancing; and (3) whether these changes could be aligned with changes to fiscal rules at the European level.

Where Do the Party Platforms Overlap?

The biggest overlap appears to be between Greens and the center-left SPD, especially on climate, labor market, housing and other social issues. However, these two parties combined are unlikely to garner a majority of seats and it is hard to see a third coalition party that is acceptable to both. On the other hand, Greens and center-right CDU/CSU would be able to secure a majority according to current polls but thematic overlap is somewhat smaller. Yet, with the center-right increasingly emulating the Greens’ position on climate change, they are reasonably close on the main topics, with divergences likely to emerge regarding the constitutional debt brake and labor market policies. In terms of coalition dynamics, this also seems to be a bit more of an “arm’s-length” relationship of essentially equal partners where the risk of a thematic takeover is significantly lower than in recent coalitions and therefore appealing to both.

The Election and Coalition Mechanics

The German electoral system is fiendishly complicated due to a mixed first-past-the-post and proportional vote, and an overallocation clause that results in a variable number of MPs. There are currently a number of numerically feasible coalitions, but it seems quasi certain that the Greens will be part of the government—either as a junior partner of the CDU/CSU or the senior partner, implying a green Chancellor. That said, a coalition will be necessary under any circumstances, and the Greens have indicated that they prefer only one coalition partner (i.e., the CDU/CSU). Other possible coalitions include a left-of-center one and even one without Green participation altogether. But, we strongly believe that given the quasi singular focus on environmental issues of this election, the time has come for the Greens to assume governmental responsibilities.

Where Does This Leave Us?

At this point, the race between the Greens (lead candidate: Annalena Baerbock) and the CDU/CSU (Armin Laschet) is statistically tied. We believe that the economic rebound and reopening should benefit the incumbent CDU/CSU, but less so the current junior coalition partner SPD. By end-June, substantially more than half of the German population will have had at least the first vaccine shot, and a successful summer vacation season (inside the EU) should provide further tailwind.

Assuming a participation in government by the Green Party and given the coalition mechanics, we believe that the keys to the finance ministry will go to the coalition partner as the Green Party will have to fill higher-profile positions close to their heart and core competencies. Moreover, the coalition treaty will very likely contain provisions on the general fiscal stance that are hard to overcome in the absence of significant shocks (such as a pandemic).

A lot has been written about fiscal risks related to the Green Party potentially forming part of a coalition government in Berlin come fall. We believe that this idiosyncratic investment theme may have become a lot more mainstream over the last few weeks and be closer to the end of its life cycle. This is increasingly turning into a question of allocation of government resources between sectors rather than overall macro-fiscal strategy and therefore a question for credit investors. That said, the key trigger for an idiosyncratic selloff in German debt would be a watering down of the German debt brake. For now, the German purse might turn green, but it won’t get much larger.